Bocas Del Toro – the next day

Today was our second full day in Bocas Del Toro, and we had booked a boating excursion. We woke up to rain, alternating between sprinkling and a downpour, but by the time we left it was not much more than a sprinkle. I was happy to see that the trip was still on, especially since we’d stayed an extra day so we could do more things.

There were 10 people on our tour. By the time we headed out towards open water it was raining again, and pouring! We were pelted with rain which stung with the speed of the boat, and it wasn’t long before everyone was soaked and everything we had with us was soaked. I was glad I had put wallets, phones, cameras, etc in plastic bags.

Our first stop was dolphin bay and it lived up to its name. We saw quite a few dolphins and it was especially fun when a couple of them followed the boat, jumping in and out of the wake.  I had brought a couple old cameras that I could lose without crying, but I still couldn’t bring myself to get mine out of their plastic bags in all that rain. But, Joel got a number of photos so I’ll send them along here when he gets them up.

Next we stopped on an island where there was a restaurant which looked like hardly more than a shack with a deck, and ordered lunch. The plan was they would cook while we snorkeled  and anyone who didn’t want to snorkel could hang out there.

The snorkel spot turned out to be close by, within sight of the restaurant but as soon as I put my face in the water I forgot about everything else! I’ve been snorkeling in the Florida Keys and the Bahamas, but I’ve never seen anything like this. The colors were so vivid, red, purple, green, blue, pink, very bright intense colors of coral, and fish, many fish. There were also a variety starfish with long woolly looking legs on everything, and anemones. I really wish I had an underwater camera. Next time for sure! It was really amazing. It was also nice to be in the warm water after being chilled in the rain.

After snorkeling we went back for lunch which turned out to be excellent! grilled chicken, salad, rice, and the best patacones I’ve ever had. Then it was on to Red Frog Beach on Isla Bastimentos (which is mostly a national park). We were dropped off on one side of the island and had to walk to the beach on the other side though amazing huge heliconias and other spectacular plants.  The beach was also beautiful as you can see from the photos. The area is named for the little red frogs that live there, but we didn’t see any of them.

So, that was our day. It was great, and we really enjoyed getting to know our fellow travelers on the boat. When we got back to the hotel, we were also very happy for a warm shower and dry clothes. Later we had a fantastic dinner but that will be another post.

Lunch on the dock, and it was an excellent lunch! We encountered another group of equally drenched visitors. 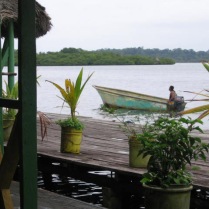 A local boat drives by the lunch dock

The bathrooms were interesting. I don’t see any plumbing below. The toilet is flushed by taking a scoop of water out of the barrel and putting it in the toilet. the men’s room had no seat. There is a trash bag hanging on the wall for used tissue. 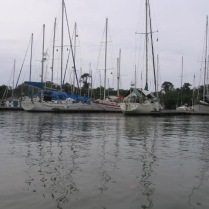 More sailboats from everywhere! The one on the right had their bicycles parked on the back.

The heliconias are huge! 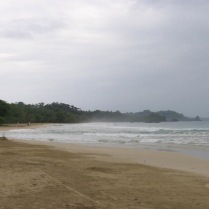 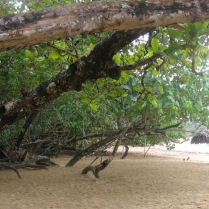 Again, there were woods along the beach. 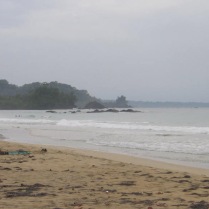 There were fun waves to play in. 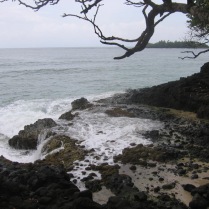 Beautiful rocky shore from an overlook above Red Frog Beach

The young people we saw at lunch also came here, and they were having a wonderful time playing in the surf. 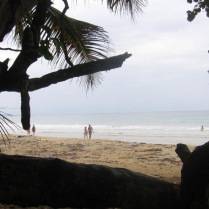 In the woods, looking out at the beach. 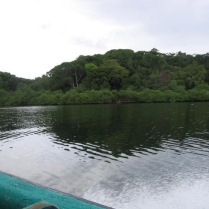 Leaving the area and boating through the many islands covered with mangroves. Some areas were so still and quiet there were beautiful reflections on the water. 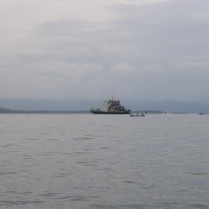 The car ferry is leaving Bocas town as we return

5 Responses to Bocas Del Toro – the next day