Posted on October 3, 2013 by Kris Cunningham

You just never know what you are going to see around here! I went out this morning to take a photos of the tree where the toucans have been visiting, and I noticed a large column of ants marching across the driveway. We have ants of all kinds here, and the closest I could guess was leaf cutter ants. None of them had the big cutting jaws though, they weren’t carrying anything, and they were all going in the same direction rather than coming and going, and there were a lot of them.

So, I follow them and saw that they were headed for the house, and up the side of the house towards the attic.

The numbers were increasing by the minute

Oh dear! I have heard about ants that invade the house, eat every crumb and scrap they can find, and then leave. I was told to just go out for an hour or two and when I return the house will be clean. Was I about to experience this? OK, maybe it will be interesting.

Then, I notice they were headed for the BEES 😦 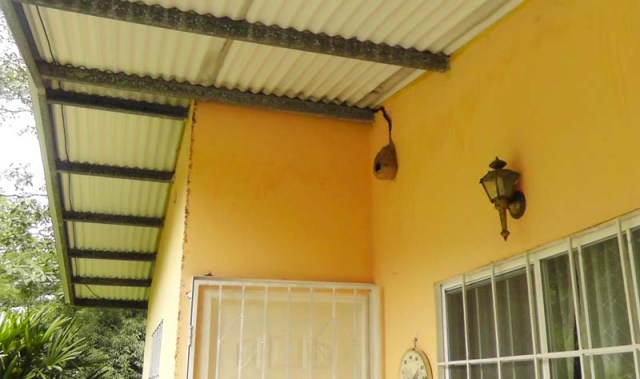 There has been a beehive above the front door as long as I have lived here. The neighbors warn me that they are very bad and will bite very hard, but these are very mellow and have never caused a bit of trouble. As a former beekeeper, I figured this beehive meant that this is the right house for me! But, this was not to be a good day for the bees. We thought about spraying the ants or trying to do something, but by now they were totally overrunning the beehive. We didn’t see much chance of success so we decided to let nature take it course.

Meanwhile, the army of ants continued to increase by the minute.

By now, we could see the ants taking bee larvae out of the hive and carrying them off.

The number of ants was extremely impressive! 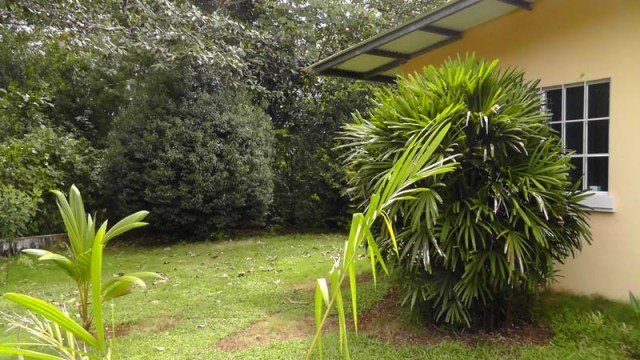 The ants were going around this bush, then around that large bush in the distance, over the wall behind it, and into the woods behind the house in the opposite direction from which they had come.

Ants going over the wall. The ants with the big white heads looked strange, and I didn’t remember seeing them among the ants on the house (though later I spotted a few in the photos)

It was an amazing attack!! I noticed them when they were first arriving and only a few ants were going up the side of the house. It wasn’t long though before there were incredible numbers of ants participating in the raid! The bees didn’t have a chance.

We went out on our bike ride, and when we returned maybe 45 minutes later there was much less activity going on, though there were still large numbers of ants going to and from the hive. I came out to check maybe ten minutes later, and it was all over. There wasn’t an ant anywhere to be seen!! The whole thing lasted maybe 1 1/4 – 1 1/2 hours in all.

I had been wanting to paint the front of the house since I arrived. The paint was old and worn, and some new paint would really freshen up the place. But, I wasn’t about to kill the bees and I didn’t think it was wise to paint with the hive right there. Well…. if the ants were gone… and the bees were gone… and I had paint on hand (from painting the patio the other day)…. lets DO IT! I enlisted Joel’s help and we went to work. 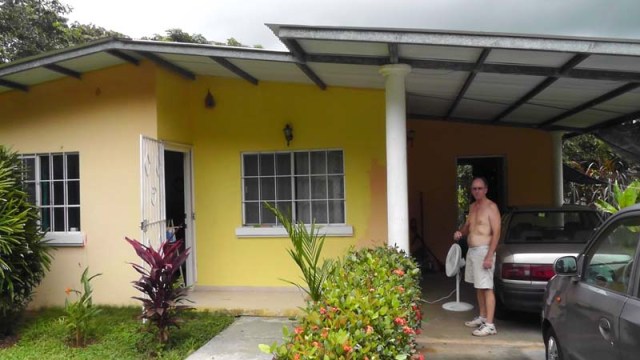 There were still a few bees flying around but they were so traumatized that they weren’t any threat. They weren’t even landing on the hive or paying any attention to me so I had no trouble painting. It looks so much better! I will paint the rest one of these days soon, but this was the section that worried me with the bees right there. Our timing was excellent because by the time we were finished more and more bees were flying around, though they still weren’t landing on the hive or being the least bit aggressive towards us.

And then, GOOD NEWS! Joel noticed a lot of bees flying around the bush right in front of the house and went to investigate. There, in that bush, was a swarm of bees.

I hope that these are my bees. Maybe when they saw the attack beginning they got out with the queen, and now they will be able to rebuild their colony. They don’t seem to be coming back to this hive, but maybe they can find another good place to live. There’s also another small colony of these bees that just begun in that same bush, so I am not without bees. Perhaps at some point, the hive above the door will look good to another colony of bees and they will move in. Please though, don’t tell the ants!

We live in David, Chiriqui Provence, Republic of Panama! This blog is about some of our experiences in our new country.
View all posts by Kris Cunningham →
This entry was posted in insects, Panama and tagged Ant, Bee, Beehive, Chiriqui Province, Panama. Bookmark the permalink.