Posted on November 2, 2013 by Kris Cunningham

While we were in Pedasi, we spent an afternoon at a nearby wildlife refuge, Isla Iguana. (Iguana Island). It’s a really beautiful place and the weather was perfect, so we had a gorgeous day to enjoy such an outing.

There was a police station at the beach where the boats launched. I had to show our passports and they wrote something in a log. The rest of the time the police seems to just hang out in the blue building.

Joel heads up the path on the island to explore the trail to the other side.

There was a visitors center with lots of info about the island and the wildlife.

Here’s one display about all the birds who can be found here.

There were lots of little hermit crabs everywhere.

Police in boats – this is a whole other story which I will tell below. 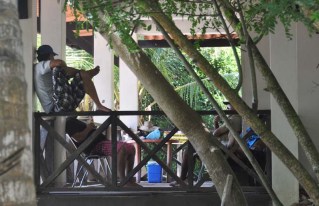 The boat captains all hang out here until their clients are ready to go back to the mainland.

Welcome, wildlife refuge Isla Iguana. Come in slowly in the indicated chanels. Moor boats on the buoys. Prohibited – anchor, walk, fish, or spearing on the reef, collecting biological material living or dead, cleaning fish on the beach, bothering the wildlife. 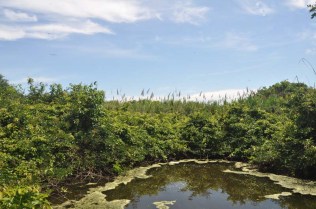 There are bomb holes on the island left over from when the US Navy was here.

Our boat captain told us the frigate birds are nesting now, which is why there were so many flying overhead. 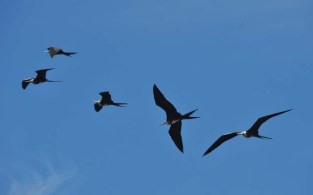 Of course there were iguanas! They hung out near the boat captains who occasionally tossed them a bit of fruit or other treat.

Am I a handsome devil or what!

More frigate birds, and some of the beautiful sand beach.

There were a few pelicans hanging out on this moored boat.

About the police boats – apparently this area is close enough to Columbia to have occasional drug smugglers trying to get through, so the police patrol the area carefully. Someone told us that there was a bust in a town just a little ways north of here.

I had to show our passports to the police before we got in the boat. Then, on the way out a police boat came along side and had a lengthy conversation with the boat captain about who we were, where we were going, how he came to be taking us to the island, etc. There were three men on this boat, one with his face covered and a large machine gun. They seemed calm and polite but the look was a bit scary. I asked if I could take a photo of them and was told “no”, but Joel had his iPad in his lap and got a fantastic one (I will try to get my hands on his iPad and post it!)

Later, another boat stopped near the island and stayed for quite a while. One of the men appeared to be watching the island with binoculars, another talked on the phone, and the others just hung out. I snapped a few photos trying to look like I was just photographing the area in general because I didn’t want to get in trouble for taking their photo. Thank goodness for a decent zoom lens 😉

Other than this minor excitement, it was a really nice time on the island. The water was clear, calm, and a perfect temperature. I enjoyed hiking across the island and watching the birds. The hotel had packed us a picnic lunch in a cooler, and sent us with a bag of beach towels. I mentioned snorkels earlier but somehow we didn’t end up with them, so next time I will definitely have to do this. The water is definitely clear and beautiful enough to make snorkeling a pleasure, and there is a lot of coral and sea life here.

Another interesting thing that we just missed – whales come here to have their babies and take care of them until they are strong enough to move on. I will have to keep this in mind for a return visit!

A google search will bring up websites like THIS ONE, if you want to read more about the island. I’m off to see what other photos I have standing by.

We live in David, Chiriqui Provence, Republic of Panama! This blog is about some of our experiences in our new country.
View all posts by Kris Cunningham →
This entry was posted in Exploring Panama, Panama, photography, travel and tagged Isla Iguana, Panama, Pedasi, photography, travel, Travel and Tourism. Bookmark the permalink.