More crawly things, I know, but there are just too many interesting bugs and spiders around here.

I picked my first crop of guandu, and when I brought the bucket to the table to shell them this crawled out.

After a while it crawled down from the bucket and hung out under the power cord of my computer.

Later it decided to crawl up the side of the plastic bottle I had on the table for my iced tea.

Then, it went up the plant which is actually only a couple fat green sticks. It was rescued from the trash but my friend says it is going to grow into something good.

It hunkered down on the underside of the plant. By now I was thinking this might be a sort of spider.

Time passed, it got dark, it spun a few threads on the plant which happens to be next to the lamp. This was good luck for the spider who quickly caught a bug.

When I left at the end of the evening the spider was hanging out on the underside of this brown tendril. This morning it was nowhere to be seen so it apparently moved on during the night. 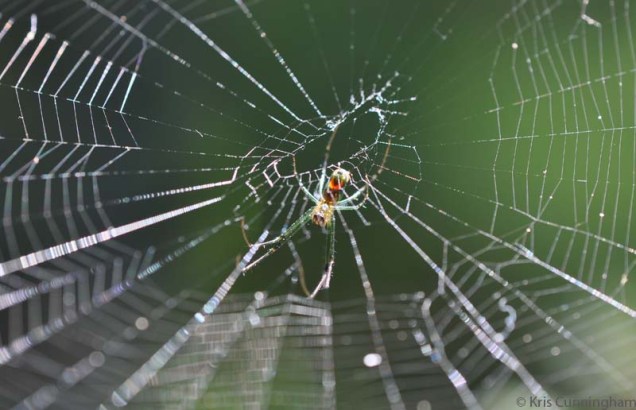 While we are on the subject of spiders, this pretty one spun a web in the potted plants.

One morning I noticed this really cool, and quite large bug on leaf outside the window.

OK, I think I am done with the bugs for the moment, but I’m sure there will be more later.

We live in David, Chiriqui Provence, Republic of Panama! This blog is about some of our experiences in our new country.
View all posts by Kris Cunningham →
This entry was posted in insects, Panama, photography and tagged Chiriqui, David, insects, Panama, Spider. Bookmark the permalink.

6 Responses to An Interesting Spider