There is a bike rental shop down the street – $1/hr or $7/day. Since we love biking, this sounded like an excellent idea. We did not know what a great adventure it would turn out to be!

We followed the road as it made its way farther and farther north past gorgeous beaches,  homes (some of which were very large and upscale), and jungles of plants and huge trees. There were also a couple resorts which accounted for some of the taxis making their way slowly over the bumps and valleys.

Eventually we came to a barrier and a sign saying only ATV’s from the Flying Pirates were allowed through, and a hand written note at the bottom which said walking and bicycles were also ok. We had gone so far we figured that it would make sense to just go forward and around the other side of the island. I had also asked a local who told me it is faster to go ahead rather than turn around.

So, we proceeded through jungle, forest, over sandy, bumpy paths, around and through mud holes, and across small waterways until we encountered a couple unhappy tourists. They had gone to visit a snorkeling spot only to discover that the rocky shore made it impossible to go in the water without good footwear, and they didn’t find the area scenic or interesting at all. They also said there was no way through, and the only way back to town was to turn around. We turned around, got back on our bikes and left them behind to walk on with their tattered sandals.

When we arrived back at the barricade and sign, a couple police were talking with some other tourists on ATV’s (not Flying Pirate rentals), and explaining to them that they could not go on. They even told us that we were not allowed which was ok since we were leaving anyway, and they conformed that there was no way back to tow except to retrace our steps.

By now I was getting much better at navigating around mud holes and over rocks and tree roots. The challenge was getting more and more fun and we made good time. I still didn’t quite have the confidence to ride through the streams though. Maybe next time!

I am SO glad for all the biking we have done. We were out for five hours and except for a break at a resort bar for something to drink, we were on the bikes the whole time. And, we are even walking pain free today, the day after, and plan to take the bikes out for another couple hours.

The scenery was incredibly beautiful and I took tons of photos. Unfortunately the wonderful little camera died but not until we were heading back, and I was able to get the photos from the card without a problem. I’m really glad I also brought the big camera on this trip because there are more adventures coming.

Enough talk about the scenery and photos. Here are some of my favorites.

It’s not long before we are riding along by the beach, and we have to stop to take a closer look.

Of course no day would be complete without an interesting bug. This beautiful little spider was on a bridge railing.

You can see how rough and rocky it is in the water though, not a place to go without caution and good footwear.

We ride on, watching the waves get bigger as we get farther north.

The surf is definitely stronger up here and we start to see warning signs about rip tides. 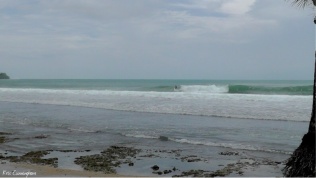 This was close to a resort and surfers were enjoying the waves. 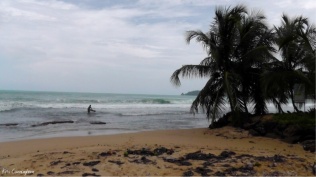 We cross one of the streams and ride on 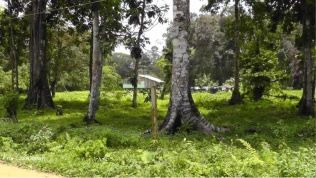 This looks like a local type house, complete with laundry on the line.

We ride on over rocks and bumps, and I miss the cushioned seat on my bike back home. 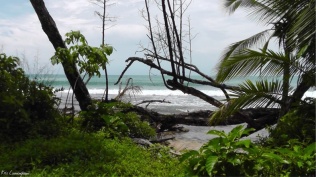 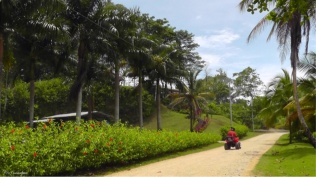 We encountered a few people on ATV’s

There were school kids in uniforms playing in the street. You can see a couple of them under the tree on the left. I think this was their school house. I didn’t see anything else anywhere that looked like it could have been a school except this.

The waves were pretty crazy up here! 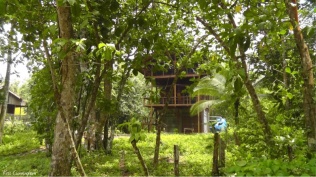 Interesting house back in the jungle

Very fancy house with a swimming pool out front. It seemed like houses here have cisterns and rainwater collection from the roofs, so I wonder how they fill a swimming pool. 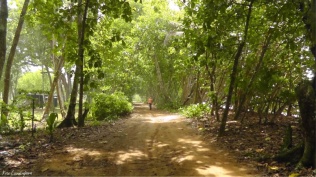 We bike on as it looks more and more overgrown and wild. 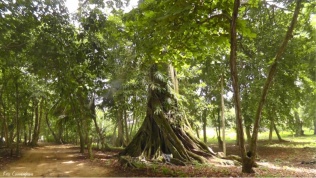 This huge tree has an incredible trunk 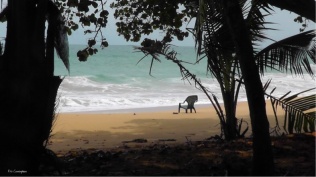 Life on the beach

Stopping to check out another beach scene 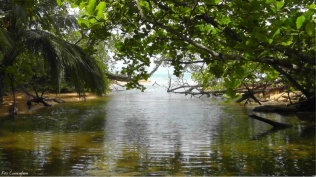 These clumps of bamboo were huge!

After seeing how many photos I took I realize I can’t say we were actually riding all that time :D.  We definitely got some exercise though, and had such a great experience in the process.

We live in David, Chiriqui Provence, Republic of Panama! This blog is about some of our experiences in our new country.
View all posts by Kris Cunningham →
This entry was posted in Exploring Panama, Panama, photography and tagged Bocas Del Toro, Bocas Town Bocas del Toro, Panama, photography, Travel and Tourism. Bookmark the permalink.

4 Responses to Biking in Bocas