There are many cliffs and walls of rock in Panama

Los Ladrillos Wall is in the Boquete area 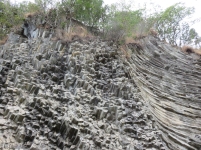 Panama was formed by volcanic activity, so it is no surprise o find evidence of this.

How nice that this wall has been cleared so we can all see it.

Los Ladrillos, or Gunko, is a basalt volcanic formation in the Boquete area of Bajo Mono. We can thank Cesar Augusto Melendez Castillo for uncovering it. He used to go exploring with his father and uncover interesting rock formations, and he was drawn to climb on them. As an adult he met Gary Henning, a professional rock climber, and that was the beginning of his own journey to become Panama’s first professional rock climber.

When Cesar started, Panama didn’t know about rock climbing as a sport. Someone even called the police thinking he needed to be saved from a suicide attempt. Now he has developed many climbing routes, and has formed a club to teach others and give them experiences in rock climbing. His site in English is HERE.

I think this is a beautiful formation, and very interesting because of Cesar and the developing sport of rock climbing in Boquete, Panama. Check out the video below to see more.