A Visit to the Fish Market

When there is no more fish in the freezer, it’s time to go to Pedregal to buy more from the fishermen. My friend Cedo wanted to come along too, so off we went.

Pedrigal is a town just a few minutes south of the David airport. It’s not hard to get to, but we never would have found this particular market if we didn’t know someone who knew someone was was acquainted with someone at this shop. If you don’t know anyone though, you can usually find fish by looking for “Se Vende Pescado” signs. We’ve found two or three other fish shops but this one is our favorite because they always seem to have the best selection.

First though, Cedo wanted to visit the marina.

First, we decided to stop at the marina at the south end of town. There were some very impressive boats there that day! 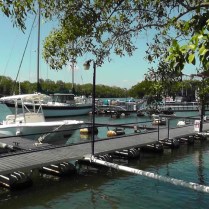 Cedo watches the fish swimming around the dock.

There were some really big yachts at the marina. We spoke to one man who was taking care of the farthest one in the first photo, and he said the boat was from Ft Lauderdale, FL. I expect there were more boats than usual because it’s cold up north now, and people prefer to be someplace warmer at this time of year.

After the marina, we set off for the fish market. 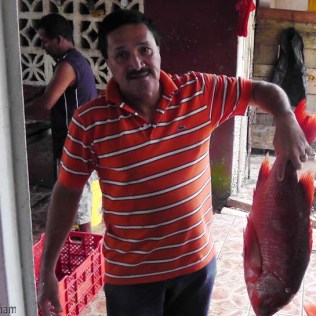 The man says I need this big pargo (red snapper)! He’s right, and I bought it. 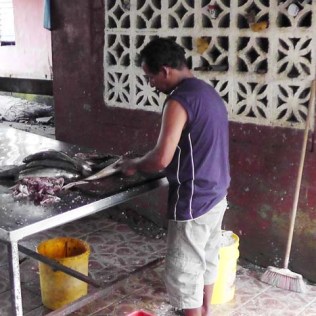 They will clean your fish, cut it into fillets, prepare the head and bones for soup, or prepare your fish however you ask (for $1-2 tip, well worth it)

This I found extremely interesting. They make all their own nets by hand! At first I thought they were repairing, but no. They were creating them.

A closer look, with the spool of line that is used. 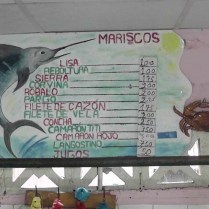 Fish prices (per pound) – whole fish. If you only buy the fillet it’s usually $.50 more per pound.

I like this fish market because the prices are much better than in the supermarket, and the fish is always fresh. We’ve bought fish quite a few times from the boxes as they are being unloaded from the boats, before they’ve had time to put the fish in the coolers (like the pargo in the photo). Even in the coolers, you know it was caught only hours before. You can’t count on them having anything in particular on any given day because it depends on what they catch, but we’ve always found something good. And, they’ve always been very nice to us.

Since we were driving right by my other favorite market, the fruit and vegetable market, we stopped there too.

I’ll have to do a more extensive post on this shop one day soon. We’re there probably twice a week!

We live in David, Chiriqui Provence, Republic of Panama! This blog is about some of our experiences in our new country.
View all posts by Kris Cunningham →
This entry was posted in Exploring the Area, food, Panama and tagged David, Fish, marina, Panama, Pedregal, shopping, yachts. Bookmark the permalink.

28 Responses to A Visit to the Fish Market